The world is filled with Chessed and Chessed opportunities. Many times our eyes are closed and the chance to help those in need is lost.

Last night Shalvat Adam hosted a “Music and Torah event” in Jerusalem. The event was called for 8pm and as usual things were running late.

All of sudden at 8:30 Daniel comes running and asks the hostess Esther, “Do you have duct tape? A woman’s car was hit by a bus and her back bumper has been detached (as can be seen from the featured photo, which is the actual photo of the car in the accident).”

Esther quickly went to check among her house supplies and said, “sure, here you go.”

Daniel took the duct tape and a pair of scissors from Esther. A group of us ran down stairs to see what could be done. A white van was sitting on Shmuel Hanagid St. exactly at the entrance to apartment building of the event. We found a young married woman in a mitpachat and two of her friends standing around her damaged car. She seemed shaken from the incident, as can well be understood.

She told us that a bus came around the corner, hit and dislodged her back bumper and then immediately drove off fleeing the scene of the accident. Disappointment could be felt from the ladies, as they were planning to attend a Binny Landau concert.

“Typical bus-drivers,” we all said.

By this time Bentzi showed up and joined the supportive cast of people trying to help out. We encouraged the lady to call the police and take pictures of the damaged van.

We then did what we could to tape the bumper back into place. Daniel taped up the car, while Bentzi stood in front of the car to protect Daniel from incoming traffic. It was unclear how far she would be able to drive with car parts out of place and a simple tape job, but it seemed at least possible now to drive the car.

The group stood together chatting for a few more minutes. Daniel encouraged the woman to stay local and drive slowly, where ever she was going.

Since the plans to attend the concert were dashed, the two ladies decided to join us at our music event.

By this time is was 9 o’clock and time to get the event started. We had a memorable night of rockin’ music, singing, Torah and dancing. Lot of good people came and a great electric energy was created by the guitar playing of Bentzi and Shlomo.

Two things we can learn and take away from the “accidental chessed” in Jerusalem last night.

Many drivers and pedestrians walking on Shmuel Hanagid passed by the white van without flinching to help a person in need. Acts of chessed do not happen accidentally. Daniel’s eyes and heart were open and he was ready to help. Those are the attributes of a true baal chessed. We can all grow and develop better Chessed instincts.

Second, Daniel’s chessed was contagious and he naturally brought others along to help the situation. It shouldn’t surprise anyone that the personal relationships and friendships allowed for a group of people to come together, take action and help out as team.

We call this, “Olam Chessed Yibaneh” – creating a ‘community’ of chessed. That was God’s intention when He created the world. 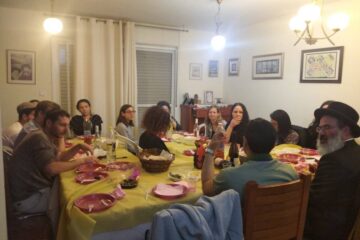 The bracha and blessings that come from being a part of a community are endless. 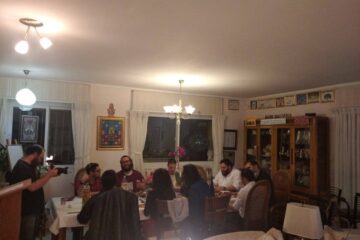 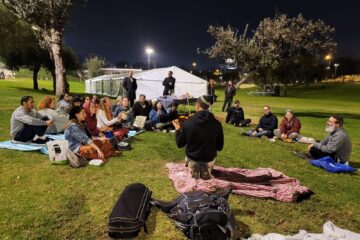 One of the segments of the poulation that has been negleted during Covid-19 has been the singles community. As such there was a need to form a new community.