Religious Jews should always be seeking a spiritual understanding of reality. This is certainly true when it comes to accessing the religious and historical significance of the Modern State of Israel.

Yom Haatzmaut falls out during the third week of Sfirat Haomer. Each week of Sfirah has a particular Kabbalistic attribute/energy which is the focus of our character building as we prepare for receiving the Torah a new and the holiday of Shavuot. The focus of the third week of the Omer, upcoming, is the attribute of Tiferet.  In addition to it being the name of our precious eldest daughter, Tiferet carries with it special qualities.  Commonly translated as splendor or harmony, this midda or attribute is personified by Yaakov Avinu.  Yaakov was the “bachir haAvot” or the select individual among our exalted forefathers.  He attained this status because he was able to synthesize the kindness chessed of his grandfather and the disciple/strength gevura of his father into a new and unique attribute.  Yaakov Avinu harmonized opposite attributes into one perfected quality.  The harmony, balance and completion that Yaakov attained is what we seek personally and nationally.

I am going to share with you an idea which I have no doubt can be found in the works or teachings of other more qualified rabbis, but I have not come across it in my limited learning.  Please let me know if you find such an idea.

Jewish history can be divided into three sections.  The first period can be identified in terms of our establishing national settlement in Eretz Yisrael.  Entering our promised land forty years after our nation’s birth (and it really was meant to happen much quicker than that), we then conquered and divided the land in extraordinary fashion.  This thirteen hundred year period, from the time of Yehoshua until the destruction of Bayit Sheni, was characterized by prophesy, kingship, great scholarship and our two glorious Temples.  It was a period in which the chosen status of the Jewish People was actualized and clearly apparent to all.

Tragically, when the Romans destroyed the Second Temple in the year 70 C.E. a mostly dark period of exile followed.  For a period of almost 2000 years we suffered all of the trials and tribulations that a homeless nation suffers.  Excluding outstanding individual accomplishments and contributions, this period was characterized by inquisitions and pogroms of various forms, virulent anti-Semitism, and horrific cruelty perpetrated against the Jewish People.

1948, תש”ח, 5708 years after the creation of the world, marks the beginning of the third and final period of Jewish history.

We can understand the first period as being characterized by the Divine attribute of Chessed.  The Jewish People were fortunate enough to bask in the outward radiance of the All-Mighty during the years of prophesy and outward Divine providence when our Temples stood.  But naturally, Chessed is always followed by Gevura.  We were forced to confront excessive harshness on foreign, unfriendly land.  After just barely surviving the exile, we return Home to usher in the third and final phase of Jewish history.

This third stage is a most splendorous stage.   The emotions of living to see and be a part of this period, on a collective national level and on a personal level, are so powerful little can be said which does justice to capture the times that we live in.  However, one word says it all – Tiferet.  Returning to our Homeland once and for all is the Tiferet of Jewish history!  Harmonizing the first period of Chessed with the second period of Gevura creates our current blessing of Tiferet.

I have great pity, not anger, on those of our generation that have been blinded for one reason or another from seeing Hashem’s Tiferet unfold in front of our eyes.  While it is true that we have not attained completion and perfection yet, ignoring the actualization of the pre-planned destiny of the Jewish people, all of which is clearly stated in the Torah (end of Sefer Devarim), is a reflection of the dark exile that has left its mark on some of our people.

Yom Haatzmaute is a day in which we are meant to express פאר or a sense of glory and thanks to Hashem, through Hallel and a festive meal, for giving us the opportunity to witness and be a part of the most wondrous period – the Tiferet of Jewish history. 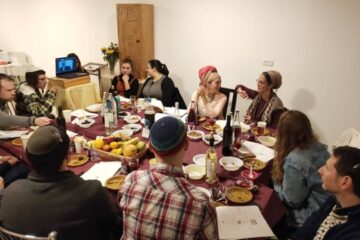 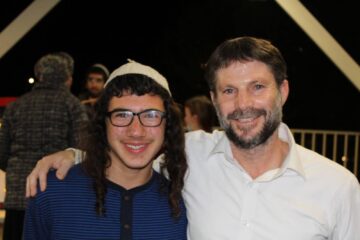 Joy and Tragedy mixed together at Shaare Zedek Hospital

Today we mark 14 years since the Mercaz HaRav Massacre. Something else happened that same day - the story.